Let’s take things from the top. I may sound a bit pedantic with my description of the symptoms and the path that led to the diagnosis of the tumour, but the point is not to make things interesting, but rather to speak to the doubts many people have as to what the symptoms of a tumour of the pancreas might be. That’s why I feel a description of my symptoms could be helpful along with the  story of how I eventually arrived at a diagnosis that didn’t come early enough to keep me from ending up with a stage-IV tumour, but it did come in time that I could still be treated.

I began to have mild pains in January of 2017. One day it would be my stomach, another day my lower back, around the kidneys. Then the discomfort would return to the area around the stomach. It wasn’t anything particularly severe, and it wasn’t a steady pain that always occurred in the same place. It’s hard to go to the doctor and tell how every once and a while you feel some pain here and there. I would notice it, but it didn’t seem serious. I felt it more when I was sitting at the computer or driving the car. I decided to wait for it to go away. I’m patient by nature, and so I waited about a month, and the pain did go away.

Meanwhile my son turned 14, beyond the age when you can still have a paediatrician as your doctor.  I had to find him a new general practitioner under the national healthcare system, and so we decided that all three of us  – myself, Danilo and our son Emiliano – would change, switching from our previous doctor, whom I’ll avoid naming (he retired not long ago, so there wouldn’t be any point) and choosing instead Francesca Stampi. This superb woman physician puts all her new patients through an in–depth examination and a full series of blood tests. I didn’t tell her about the pain, because it had gone away, so I no longer even thought about it. But the tests did show that my blood sugar was very high.

I’d been overweight for decades, and my life was extremely sedentary, so Dr. Francesca decided, before sending me to a diabetes specialist, to try putting me on a diet and a regime of exercise for a couple of months, to see if things got better. I contacted Stefano Dini Modigliani, a very accomplished, caring and thorough nutritionist at the Alimentare  health centre. He prescribed a low-sugar diet which I enjoyed, and which I was able to stick to: no sweets, only whole-wheat carbohydrates, lots of fish, meals that begin with a salad or a soup, lots of legumes etc..

I also started working out. Pierluigi is a personal trainer who offers people in the neighbourhood conditions that even somebody as lazy as I am can’t refuse. He’s good at what he does, so that I wound up going practically every day for a 40-minute session. I enjoyed myself too, seeing that we’d talk a lot during the workouts. Over a three-month period, I managed to stay with the program, losing four kilos a month.

In August I started feeling the pains again. The nutritionist and I decided to try reducing the quantity of the legumes. A few months  went by, during which I was busy preparing for the opening of an apartment to be used as a co-working and co-living facility (the contatto), something different from anything else available. I had a lot to do. The pain wasn’t that bad, but it started to take up an increasingly large space in my consciousness.

Shortly after the contatto opened up for business, I decided that the time had come to take a moment and go see my doctor. I told her about the pains back in January and about the more recent ones. I believe that was when she started to put all the information together, and so she prescribed an urgent ultrasound exam for two days later at the public medical centre on Rome’s Via Boccea.

During the ultrasound, I recognised the kind of compassionate look that I’ve been receiving ever since. The very pleasant lady radiologist kept moving the ultrasound wand over the spot where, as I was to learn, the pancreas is located. I barely knew I had a pancreas, much less where to find it. When the exam was over, she told me, with a downcast look on her face, that something was not right, and she suggested that I get a CT scan done on an urgent basis.

My doctor prescribed and scheduled a total-body CT scan for October 31st, which was when the less than pleasant head radiologist told me I should go find a surgeon, that I had a problem with my pancreas, even though everything else was ‘clean’. And in light of the situation, he could prepare the write-up of the exam by November the 2nd, rather than taking a week to do it. 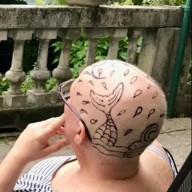